SITES & SOUNDS in TRAVEL in 2017 is our first show of the new year. With a handful of world travelers we found an array of  new finds/destinations worth considering in 2017. From Jon Haggins  of Globtrotter TV we found Brazil’s North Coast an enviable choice. Jon also liked the environs of the City of Assisi in central Italy in 2016 as a best bet.Jon hiked his way across miles of rugged terrain on this pilgrimage walk he informed us. His next ascent will be the islands of Indonesia. We wish him good luck. After Jon we found a willing hand in Dr.Suzanne Frye. She’s a member of the Circumnavigator Club in New York City and the Travellers Century Club whose rules include a heavy minimum of 100 countries as a starting point. Suzanne has now traveled to 268 so far. In 2017 she’s headed toward Spain’s Canary Islands in March and the island of Komodo in Indonesia in late Summer-early Fall. We wish her safe harbor in 2017. 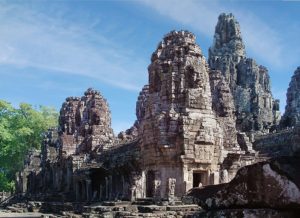 Suzanne next door neighbor on the panel was Colleen Katz, former editor of the Women’s Day magazine and a host of other magazines in the business and trade media fields. Her favorite destination is PARIS, France which she’s visited over 60 times in the last 30 years. Yes, you guessed it. Colleen is en-route to Paris again in Spring. She’s a true francophile. She also is up on eight other languages but French is her native tongue after English. To Colleen’s right was Warren Shaw, a professional architect by trade but an adventure traveler where or when he can. He picked the provinces of Vancouver and Winnepeg in au Canada as his first choice to revisit in 2017 followed by a trip to northern India where he’ll done a camel along the way. Warren also likes cruising the high seas he informed us on a luxury vessel. His choice was the Crystal Lines’ Symphony class where he sailed to Hamburg, Norway, Amsterdam and finally the UK in 2016. Go Warren. Next to him was Steve Montgomery, a film maker by trade but a foot soldier to exotic destinations by any means. His recent forays into Saigon, Cambodia and Vietnam were inspiring he intoned. Says he’d like to revisit this part of  Asia  again in 2017. Our best wishes go to Steve and send us some photos while you’re there.

Finally we had Bing Sun, President of  China & Asia Travel Service, Inc., join us. As Vice Chairman of PATA, the Pacific Asia Travel Association in New York, Bing Sun has seen a lot of the Asia-Pacific Rim of late. He particularly likes the leading cities of China as his pick for travel in 2017. Beijing,Honk Kong,Singapore are among his favorites choices. We agree there’s a lot to see in China in 2017.

Theater For The New City